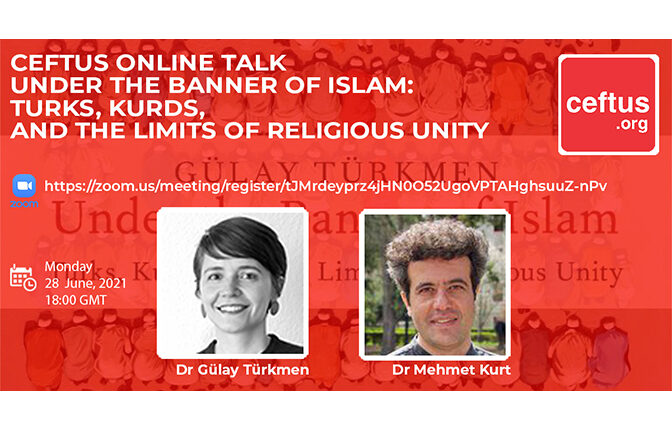 Under the Banner of Islam: Turks, Kurds, and the Limits of Religious Unity, with Dr Gülay Türkmen and Dr Mehmet Kurt

Under the Banner of Islam: Turks, Kurds, and the Limits of Religious Unity, with Dr Gülay Türkmen and Dr Mehmet Kurt

This online meeting discussed Dr Gülay Türkmen’s recently published book, Under the Banner of Islam: Turks, Kurds, and the Limits of Religious Unity (Oxford University Press, 2021). Dr Türkmen is a political sociologist and a postdoctoral researcher at the University of Graz’s Center for Southeast European Studies. The event was chaired by Dr Mehmet Kurt, an expert on religion and religious movements in Turkey. Dr Kurt is a Lecturer at Yale University and a Marie Sklodowska-Curie Global Fellow at the London School of Economics (LSE). Dr Kurt also acted as a discussant and contributed to the event with his comments and questions.

Dr Türkmen began by highlighting the main themes and questions her book probes. She mentioned that the ‘civil Friday prayers’ (‘sivil Cuma namazları’) were at the centre of her research and provided background information on them and how they informed her research. She said civil Friday prayers were held out on streets and initiated in 2011 as acts of civil disobedience by some Kurdish clerics, who demanded the right to give the Friday sermons in the Kurdish language. These prayers took place at a time when the ruling Justice and Development Party (AKP) and the outlawed Kurdistan Workers’ Party (PKK) both emphasised Islam as a remedy for the 4-decades long armed conflict between the PKK and the Turkish Armed Forces. This narrative presented Sunni Islam as an overarching identity that could bring the majority Sunni Kurds and Turks together. She emphasised that the civil Friday prayers challenged the government’s authority politically and religiously and became very popular during the two years they were held. They functioned as an activity that drew attention to the assimilation of the Kurds by the state by highlighting the ban on the Kurdish language sermons and the limitations placed on the use of the Kurdish language in public.

Dr Türkmen said her book focuses on Sunni Islam’s ambivalent role in Turkey’s Kurdish conflict—both as a conflict resolution tool and as a tool of resistance. She mentioned that since the 1980s, different governments in Turkey had used religion to subdue Kurdish nationalism, but none has advocated Muslim fraternity as much as the AKP. The role of religion became so pronounced during the peace talks between 2013 and 2015. The PKK leader Abdulah Öcalan and the current Turkish President Recep Tayyip Erdogan recited the same Hadiths (Prophet Muhammad’s discourses) to emphasise Muslim unity and solidarity. Despite this emphasis, however, Sunni Islam has not resonated strongly among Kurds and Turks in Turkey and failed to become a base for a peaceful resolution of the conflict in Turkey. In the summer of 2015, the ceasefire ended, the fighting resumed, 1000s of people died, and many more became internally displaced.

Following this brief discussion of the context, Dr Türkmen delved into her research problem and said her study uses Turkey as a case study to understand how religious, ethnic, and national identities converge in ethnic conflicts between co-religionists. She said she engages with a question that informs how we understand religiously homogeneous ethnic conflicts today: Is it possible for religion to act as a resolution tool in violent ethnic conflicts? Dr Türkmen then listed the three research questions the book investigates: (1) How do religious, ethnic and national identities diverge and converge in religiously homogenous ethnic conflicts? (2) Is it possible for religion to act as a conflict resolution tool in such conflicts? (3) Why is it that despite the changing stances of the Turkish state and the Kurdish movement, the two parties have failed to unite ‘under the banner of Islam’?

Dr Türkmen briefly went through the methods she used in her study and mentioned she interviewed 62 Kurdish and Turkish religious leaders in Istanbul, Diyarbakir and Batman during 2012 and 2013. She also used the participant observation method and observed the civil Friday prayers in the cities of Diyarbakir and Batman. She analysed newspapers focusing on the speeches by politicians and offered historical institutional analysis based on secondary sources.

In the rest of her presentation, she unpacked the analysis she has developed to answer the failure of religion to act as a tool for solving the Kurdish conflict in Turkey. She mentioned that despite doing her research during the peace process when the idea of using religion as a tool to unite Kurds and Turks was very popular, her interview data revealed that Sunni Muslim identity was far from uniting the religious elite and motivating them to advocate for Muslim unity and fraternity. One of the main reasons Sunni Islam has failed to unite the religious elites is the variation in how these elites conceptualise religious and ethnic identities. All of the people she interviewed agreed that Islam could be used as a conflict resolution tool, but because they diverge in their conceptualisation of Islamic teachings and religious and ethnic identities, Islam plays a much less influential role as a peacemaker. She then went into details of the different identity categories (‘religio-ethnic’, ‘ethno-religious’, ‘religious’ and ‘secular-ethnic’) that people could be converged under and elaborated on each of them by reading quotes from her participants that show the different attitudes the people grouped under these categories have to religious and ethnic identities. Following this detailed discussion of the content of her book, Dr Türkmen discussed her study’s main conclusions. In addition to emphasising the role of those divergences in the religious elite’s attitudes towards ethnic and religious identity, she also mentioned other domestic and regional political developments and factors that also played a role in the failure of the peace process and contributed to the resumption of the conflict.

After Dr Türkmen’s presentation, Dr Kurt commented on some of the themes that Dr Türkmen covered in her presentation and discusses in detail in her book. He began by praising Dr Türkmen for providing a detailed examination of the historical and sociological processes of how religion has failed to serve as a unifying factor. He then raised some questions about the issues discussed in the book. He asked Dr Türkmen to discuss the research process in more detail and asked how her positionality as a Turkish scholar impacted the responses of the people she interviewed. Dr Kurt also asked for more elaboration of the political theology of Turkish Islamism and whether it was an invitation to bring Kurds and Turks together or whether it was a tool for eradicating Kurdish ethnic identity. Finally, Dr Kurt asked Dr Türkmen to reflect on Turkish Islamists’ reactions to Kurdish demands for their rights, which mainly centre on accusations of dividing the umma (Muslim community) in Turkey.

The event continued with Dr Türkmen’s responses to the questions and comments by Dr Kurt and further questions from the audience. 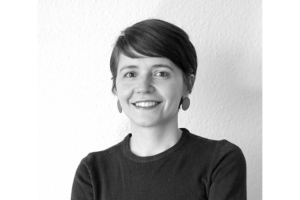 Dr Gülay Türkmen is a political sociologist and postdoctoral researcher at the University of Graz’s Center for Southeast European Studies. Her work examines how macro-scale historical, cultural and political developments inform questions of belonging and identity-formation in multi-ethnic and multi-religious societies. She is the author of Under the Banner of Islam? Turks, Kurds and the Limits of Religious Unity (Oxford University Press, 2021). She has published in several academic outlets including the Annual Review of Sociology, Qualitative Sociology, Sociological Quarterly, Nations and Nationalism, and New Diversities. 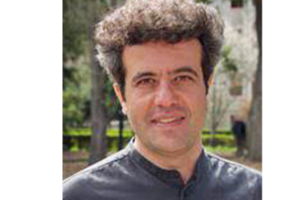 Dr Mehmet Kurt is a Marie Sklodowska-Curie Global Fellow at the London School of Economics (LSE). His research lies at the intersection of political sociology and anthropology of religion with a specific focus on political Islam and civil society in Turkey and among the Muslim diasporic communities in Europe and the USA. He currently works on transnational Islamic movements and mobilisations, and examines the ways in which Turkish Muslim communities experience and imagine Islam, ethnicity, identity and citizenship in Europe and the USA.
His book, Kurdish Hizbullah in Turkey: Islamism, Violence and the State (Pluto Press, 2017) offers a textured and nuanced analysis of the political theology, intercommunal conflict, and the everyday manifestation of ethnic and religious identities among the Hizbullah members in Turkey. He is the author of numerous articles, book chapters and op-eds published in English, Turkish and Kurdish. In addition to his academic scholarship, Mehmet directed an ethnographic documentary film, the Seven Doors (2019), which received The Jean Rouch Award 2020 from the American Anthropological Association Society for Visual Anthropology’s Film and Media Festival and Merit Award in Youth Issues 2020 from Docs Without Borders Film Festival.
Dr Gülay TürkmenDr Mehmet Kurt
507
Share FacebookTwitterReddItWhatsAppPinterestEmail
CEFTUS 856 posts 0 comments