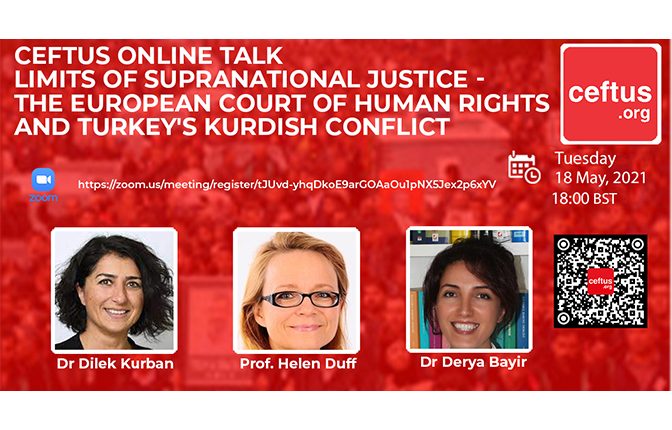 In her introduction to the topic, Dr Bayir reflected on her own experience as a young lawyer in Istanbul working for the Human Rights Association and as part of the Kurdish Lawyers Association. She mentioned that she had litigated many cases before the European Court of Human Rights (ECtHR) defending victims of human rights violations. She then introduced the speakers and listed some of their achievements and contributions to the study of human rights and international law.

Dr Kurban began by discussing an encounter she had in the summer of 1998, which is the inspiration behind her writing the book. She said she was assisting a group of American human rights lawyers in a fact-finding mission in South-eastern Turkey, and the Diyarbakir Bar Association hosted them. She mentioned how she was struck by the resilience of the Kurdish human rights lawyers, who were involved in ECtHR litigation despite being victims of state violence. One of the lawyers she met was Tahir Elçi, a well-known human rights lawyer targeted by the state for his human rights work during the 1990s and was assassinated on 28 November 2015 in the circumstances implicating the state’s responsibility. To date, the perpetrators remain unidentified. The cover of her book displays an image of the funeral of Mr Elçi.

Dr Kurban then displayed some photos of the Turkish military operations that started in July 2015 in Turkey’s Kurdish regions against the Kurdistan Workers’ Party (PKK) militants and discussed how the Turkish military bombed the Kurdish towns without any regards for the presence of civilians. From August onwards, curfews were declared in many Kurdish populated cities and towns, preventing people from leaving their houses and leaving them without access to food or water supplies. She then provided statistics on the rights violations during that time and highlighted none of the security officials involved in these violations were held accountable for their actions to this day.

Dr Kurban then discussed the case of Taybet Inan, a 57-year-old Kurdish woman who was shot to death by Turkish security forces on 19 December 2015. She was coming back from visiting a neighbour across the street, and her ‘crime’ was to step out during a curfew in her town of Silopi. She lay wounded in front of her house, and her family called for an ambulance which never arrived. Her brother-in-law tried to help her, but he was shot as well. The family attempted to get authorisation to go out to get medical aid and were told that they could as long as they carry while flags, but they were shot at by security forces as soon as they step outside. Unable to do anything to help, the family watched Taybet Inan and her brother-in-law bleed to death, and Taybet’s body remained in the street for a week. She was buried by the state with most of her children and family prevented from attending the funeral, and the family was unable to do conduct a religious ceremony.

The individuals subjected to gross human rights violations went to Turkish courts to redress their suffering, but all their efforts failed. The ECtHR also rejected most of the applications by people because they did not exhaust the domestic remedies. In cases it was able to review, it could not force Turkish authorities to take action to prevent human rights violations. Dr Kurban then proceeded to explain how this has been possible? Turkey is a candidate for EU membership and has ratified the European Convention on Human Rights in 1954.

Dr Kurban mentioned that the European Convention on Human Rights is one of the most effective mechanisms for protecting human rights, but it has not been very effective in changing Turkey’s policies towards the Kurdish conflict, including state violence against Kurdish civilians and criminalisation of Kurdish non-violent dissent. Dr Kurban said her research seeks to answer: ‘What are the possibilities and limitations of effective review by a supranational human rights court of authoritarian regimes engaged in state violence against minority groups in the name of counter-terrorism? She opened up what is understood by effectiveness, mentioned that Turkey’s case has been overlooked in the existing academic research and highlighted why Turkey is an interesting case study for the research question. She then briefly discussed the theory and methods she used in her research.

Dr Kurban summarised her findings and highlighted the shortcomings of the ECtHR. She emphasised that the ‘ECtHR’s oversight of state violence has never made full use of its review powers’ to identify the patterns of state violence in the Kurdish conflict or address the core issue. She then discussed what the Turkish case offers to academic scholarship on the effectiveness of the ECtHR.

Then, Professor Duffy commented about the book’s subject matter, and the issues Dr Kurban’s book raises. She began by emphasising the importance of the book for the debate on human rights, praised Dr Kurban for ‘a beautifully written book’, and managing to ‘write a thorough academic text that weaved together the narratives of real people’s stories’. She said that it is a book that reflected on the personal through the lens of the law. The book deals with complex macro issues, the role of a particular supranational court and makes cross-references to the Inter-American system. She emphasised that many of the problems we are dealing with now in Tukey are very similar to those experienced during the 1990s, which shows the continuity of the situation. She asked: To what extend the situation in southeast Turkey during the 1990s and the failure of the international responses paved the way for what has come now? She drew attention to Turkey’s misuse of the label terrorism way before it has become more common internationally after 9/11. Prof. Duffy also drew attention to the point the book makes about the need to situate the practice of litigation and courts’ decisions within the broader political and geopolitical context. She emphasised that the book contributes to our understanding of the role of civil society and lawyers and whether legal mobilisation is effective or not. Prof. Duffy argued that the findings also raise a question about what would be a strategic approach to using litigation by civil society or by lawyers? She continued her remarks about the role of the ECtHR and said that most of the analysis Dr Kurban provides resonate with her. Prof. Duffy asked about the expectations from the Court and emphasised that courts cannot solve problems but can contribute to a solution in some ways. In terms of effectiveness, she said we need to look at the impact the Court has alongside other actors and developments, and we need to look at the impact in a number of ways.

The event continued with further questions and comments from Dr Bayir and the audience on different aspects of Dr Kurban’s talk. 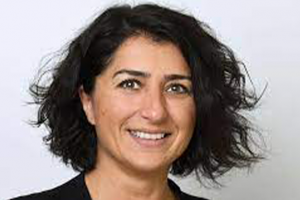 Dr Dilek Kurban is a Fellow and Lecturer at the Hertie School in Berlin. She obtained her PhD from Maastricht University Faculty of Law in 2018. Her dissertation received the Erasmus Dissertation Prize 2019 in the Netherlands. She also holds a Juris Doctor (JD) from Columbia Law School and a Master in International Affairs (MIA) from the School of International and Public Affairs at Columbia University. Her research interests include supranational human rights courts, state violence, legal mobilisation and judicial politics, with a particular focus on authoritarian regimes and a regional focus on Turkey. She is the author of Limits of Supranational Justice: The European Court of Human Rights and Turkey’s Kurdish Conflict (Cambridge University Press, 2020). Kurban’s research is also published in edited volumes and in peer-reviewed journals, including Human Rights Law Review and Columbia Human Rights Law Review. Her research received funding from Columbia University, the European Commission (the Marie Curie and FP programs) and Mercator Stiftung. During 2012-2019, as the Turkey expert of the Network of Independent Experts in the Non-Discrimination Field, she reported to the European Commission. Before transitioning to academia, during 2005-2013, she engaged in policy-oriented research at the Turkish Economic and Social Studies Foundation (TESEV), most recently as the Director of its Democratisation programme. During the same period, she wrote regular columns in Turkey’s leading newspapers and frequently appeared on international media to discuss her research and to comment on human rights and democratisation in Turkey. Earlier in her career, Kurban worked as an Associate Political Affairs Officer at the United Nations Department of Political Affairs in New York.orked as an Associate Political Affairs Officer at the United Nations Department of Political Affairs in New York. 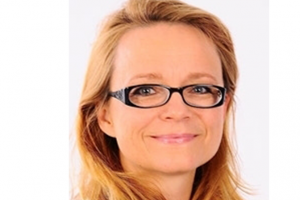 Prof. Helen Duffy has been a staff member of the Grotius Centre since January 2015 when she was appointed as Gieskes Professor of International Human Rights and Humanitarian Law. Professor Duffy currently teaches Masters courses: ‘International Protection of Human Rights’ and ‘Humanitarian law, Human Rights and Terrorism’. In addition, she also runs ‘Human Rights in Practice,’ an international practice based in the Hague that specializes in strategic litigation before regional and international human rights courts and bodies (www.rightsinpractice.org). She held a variety of international legal positions prior to establishing her practice in 2011 including: Legal Director of INTERIGHTS, Legal Officer in the Prosecutor’s office of the International Criminal Tribunal for the former Yugoslavia (ICTY), Counsel to Human Rights Watch/New York, Legal Director of the Centre for Human Rights Legal Action (Guatemala), Legal Adviser to the UK ‘Arms for Iraq’ Inquiry and Legal Officer in the UK government legal service. Prof. Duffy is Honorary Professor at the University of Glasgow and visiting professor at the University of Melbourne and American University. She serves on the advisory boards of several organisations. Her publications on international law and practice include The ‘War on Terror’ and the Framework of International law’ (CUP, 2015) and Strategic Human Rights Litigation: Understanding and Maximising Impact (Hart Publishing, 2018). Her current areas of research include human rights litigation, the interplay of human rights and humanitarian law and several issues related to counter-terrorism, human rights and the rule of law. 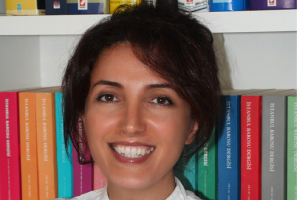