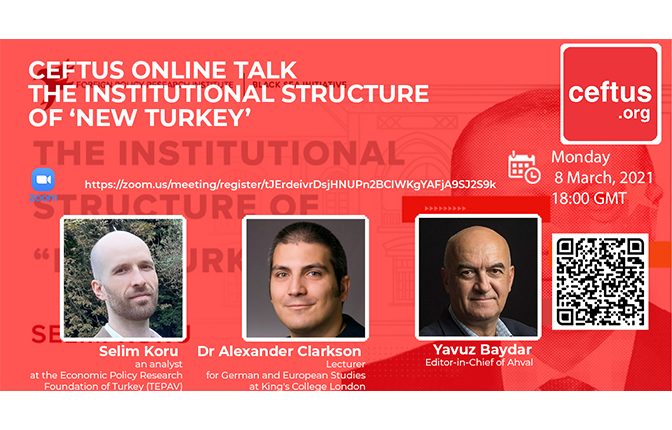 The Institutional Structure of ‘New Turkey’

Turkey’s executive presidential system was introduced after the governing Justice and Development Party (AKP) government narrowly won a referendum on the constitutional amendment in 2017. President Recep Tayyip Erdoğan was elected as the first president in the new system in June 2018. The system overhauled the legal and institutional structure of the country. Though it has remained relatively stable, the opposition parties have continued to campaign for a re-introduction of the parliamentary system. This panel focused on unpacking the new institutional structure of Turkey’s ‘super-presidential system’, exploring how it might evolve in the future and discussing the challenges it faces.

Yavuz Baydar, Editor-in-Chief, Ahval News Online, introduced the talk and mentioned that Turkey was a country in deep crisis on many levels, and highlighted the need to look at the deeper level changes taking place. He said an unprecedented consolidation of power has been taking place in Turkey since the country transitioned to the ‘executive presidential system’ and reflected on some of the questions that the talk was going to address. The main speaker was Selim Koru, Policy Analyst at The Economic Policy Research Foundation of Turkey (TEPAV) and Fellow at Foreign Policy Research Institute (FPRI), who authored a strategy report, The Institutional Structure of ‘New Turkey’, published by the PFRI recently. Baydar introduced Koru and referred to some of the highlights of his career. He also introduced the second speaker and discussant, Dr Alexander Clarkson, Lecturer in German and European Studies, King’s College, London.

Koru said his report is made up of two parts: the first part offers a timeline of the developments and the emergence of Turkey’s political structure. The second part is a look underneath to see what was going on in these institutions and the institutional patterns. He briefly talked about how he came into writing the report. He referred to an old reference book in Turkey, which had a chart at the back, setting out the Turkish governmental system and how the institutions worked. The new system, he said, does not have a map, and Koru wanted to outline how the new system is set out in Turkey. He mentioned how everything in Turkey’s new political system revolves around the President. The idea is that the presidency represents the majority of Turkey’s population or the people’s will. That is all you need to govern Turkey.

Concerning the timeline of developments, Koru said his analysis started in the mid-2000s, and he referred to the AKP’s attempts to stay in power and not be a victim of a coup. He mentioned that the year 2007 was a seminal moment, and he referred to the ‘267 event’, referring to the AKP’s attempt to appoint its candidate, which it had a constitutional right to do, but the opposition and the high-court judges prevented it. As a response, the AKP chose to have an early election, and following an increased majority, then introduced the changes that essentially made the presidency an elected office. It meant that all future presidents following Abdullah Gül were to be elected.

During Gül between 2007 and 2014, there were tensions between the government and the presidency, but Gül and Erdogan were from the same political tradition. President Gül was distant, but in that period, Erdogan was trying to take over the party and lay the ground for a Turkish style presidential system and make the idea of it popular among the people. Koru referred to his experience of a town hall meeting in 2011 on the constitutional reforms and mentioned how people attending were very opposed to the idea of the presidential system. Erdogan won the 2014 presidential election, and he had a placeholder as a prime minister. Ahmet Davudoğlu was seen as the EU’s man within the AKP because he had good relations with the EU.

Clarkson interjected by highlighting that even though Davudoğlu irritated some people in Europe, Europeans thought they can work with him. At that time, there were other serious people, such as Davudoğlu and the Finance Minister Mehmet Șimşek, in the government that European could talk to and approach. Erdogan’s ability to do what he did was helped by the fact that these people were part of the government.

Koru said that 2015 was a critical year because two elections were held in Turkey in that year. In the first election, the AKP lost its decisive majority, and a hung parliament emerged. The pro-Kurdish Peoples’ Democratic Party (HDP) entered the parliament after it won 13 per cent of the vote and 80 seats in the parliament. Koru said, in June 2015, the AKP looked relatively weak. There was a peace process in Turkey at the time, and the HDP offered Erdogan support in exchange for continuing the peace process. Erdogan said no, and there was a resumption of the war and return to nationalist politics that enabled the AKP to win the second election. Soon after, Erdogan’s supporters got rid of Davudoğlu and intensified their efforts to consolidate the presidency. The coup attempt provided the opportunity for Erdogan to consolidate the presidency fully. The alliance he formed with the nationalist MHP enabled him to build the presidency he wanted to create.

Clarkson mentioned that Turkey was not unique, and there are similar examples elsewhere, especially in Eastern Europe. He asked if what Turkey is going through is a long-term trend and wondered if it is a regional trend given various countries in the region also experience something similar, for example, Ukraine, Bulgaria, Georgia, etc. He asked about the relations between the top-level and regional power brokers, and how does Erdogan keep the balance?

Koru mentioned that Turkey had a very top-down system, and the second factor was the Gülenists, who were the battering rams, who took over the institutions. Erdogan survived because of the European normative dimension, the view that coups are bad is accepted in Turkey. He said the post-Kemalist consensus, an alliance between liberals, Islamist and pro-Kurdish and left elements, made Erdogan less vulnerable. Erdogan was unable to control the big business, but he could grind them down after the Gülenists increased their power in bureaucracy.

Koru said the Gülenist factor was the unique factor in Turkey. Gülenists made Turkey different from all other cases because they were very effective in destroying the institutions. Their presence in the institutions was widespread, and everyone has a story, and that is why when Erdogan talks about the Gülenists, the country understands. The Gülenists were very punctual, coherent, and effective.

If the system remains in place, there is the question of secession and who will replace Erdogan. The second problem of merit or competence (liyakat sorunu), getting the right people in the right places. Koru believes incompetence may undermine the stability of the system and will make the system less effective.

The event continued with questions from the audience.

Selim Koru is an analyst at the Economic Policy Research Foundation of Turkey (TEPAV) and a Black Sea Fellow at the Foreign Policy Research Institute (FPRI). He writes about political ideas and is currently working on a monograph on the roots of “New Turkey.” Koruholds a BA in History from the University of Wisconsin-Madison, and an MA in international politics and economics from the Johns Hopkins University School of Advances International Studies (SAIS). He has also studied for a year at Boğaziçi University in Istanbul. Koru is currently studying for a PhD in the history of political thought at the University of Nottingham. He divides his time between Ankara and London.

Dr Alexander Clarkson is Lecturer for German and European Studies at King’s College London. His research focuses on the politics of diaspora communities in Europe and EU border policy. He is author of ‘Fragmented Fatherland: Immigration and Cold War Conflict in the Federal Republic of Germany’ (2013).’

Yavuz Baydar is the Editor-in-Chief of Ahval – a trilingual, independent online news and podcast site on Turkey.

His opinion articles have appeared in the  Guardian,  Süddeutsche  Zeitung, New York Times, El Pais, Svenska Dagbladet, the Arab Weekly, and Index on Censorship. Baydar was among the co-founders of the independent media monitoring platform, P24. In  2014,  as a Shorenstein  Fellow at  Harvard  Kennedy  School of  Government, he completed an extensive research paper on self-censorship, state oppression and threats over journalism in Turkey – in the wake of  Gezi  Park protests. Baydar  is  the  author  of  the  book,  “Die Hoffnung Stirbt am Bosporus –  Wie die Türkei Freiheit und Demokratie Verspielt” (“The Hope dies at Bosporus: How Turkey Squandered Freedom and Democracy”). He was given in 2018 the prestigious ‘ Journalistenpreis’ by the (Munich-based) SüdostEurope Gesellschaft in Germany; and, the Special Award of the European Press Prize ( EPP), for ‘excellence in journalism’, in 2014. Turkey’s first news ombudsman, he served as president of the  U.S.  based  International  Organization of  News Ombudsmen (ONO) in 2003.