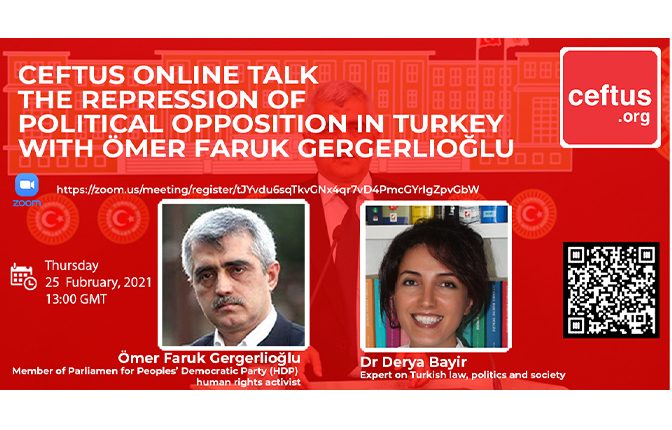 The repression of political opposition in Turkey

Photos of the events

The online talk with Mr Ömer Faruk Gergerlioğlu, the Peoples’ Democratic Party (HDP) MP for the Kocaeli province, was chaired by lawyer and academic Dr Derya Bayır. Dr Bayır briefly talked about the CEFTUS then introduced Mr Gergerlioğlu and the subject of the talk.

Mr Gergerlioğlu briefly talked about his background and the activities he took part in as medical doctor, a human rights activist and a politician. He then began explaining the politically motivated case against him, which is symbolic of Turkey’s repression of political opposition. He drew attention to the many difficulties associated with being a human rights activist in Turkey. Before, he was called a ‘terrorist’ because of his activism against the headscarf ban. Now he is again being called a ‘terrorist’ because he defends the Kurdish people’s rights.

For a long time, he has been advocating a solution to the Kurdish question based on human rights and reforming the constitution to make it compatible with human rights and democratic norms. Mr Gergerlioğlu mentioned that he was one of the people who established the Kocaeli Peace Platform, which attracted people from all political parties, ethnic backgrounds and walks of life. As its spokesperson, Mr Gergerlioğlu would use social media to raise awareness of the developments in the conflict and the efforts to establish peace.

On 9 October 2016, he shared a picture of a scene where two coffins were on display, with one being covered in the Turkish flag and another in a PKK flag. He shared this image and commented that he wished the young people were standing and talking about peace rather than inside the coffins. Some people praised the post, but others were angered by it and participated in a social media lynching campaign against Mr Gergerlioğlu. This led to him losing his job at a public hospital and his removal as a member of various associations. He was not able to find another job except one in a small hospital in south-eastern Turkey.

Later on, the public prosecutor told Mr Gergerlioğlu that the picture he shared on Twitter did not constitute a crime, but he lost his job despite that. The public prosecutor found an issue with another social media post after the attempted coup in 2016. In the aftermath of the coup, the government talked about democracy, respect for human rights etc. In an interview with a Turkish newspaper, a PKK leader Murat Karayilan stated that if the government took steps towards a peaceful solution, his movement was willing to reciprocate.

Mr Gergerlioğlu retweeted this article, and his retweet showed the picture of PKK fighters that the newspaper used for the piece. Mr Gergerlioğlu was prosecuted for retweeting the article and subsequently was found guilty of ‘propaganda for the PKK’. The article is still accessible, the newspaper did not face any charges for publishing it, and none of the many people who retweeted the article faced charges.

Mr Gergerlioğlu mentioned that he has been one of the most active MPs in the parliament and has been doing all he can to represent his constituents and the people of Turkey as a whole. He has spoken out on many human rights violations and has recently taken up the issue of the widespread use of strip searches in prisons. He said that many women were forced to remove their underwear and perform some physical exercises. Many women who have experienced this form of torture came forward following Mr Gergerlioğlu’s campaign and his efforts resulted in a #MeToo movement. Students at the Bogazici University who were protesting the appointment of a rector with close ties to the governing AKP were also subjected to strip searches when they were detained. The authorities had to accept that they were using strip searches but only in few cases. Mr Gergerlioğlu said that his campaigning around strip searches ‘touched a nerve’, and then the government targeted him even more. Many of the victims were encouraged by his campaigning and sent him messages of support.

Many government representatives targeted Mr Gergerlioğlu. They claimed that he was lying, that he was a Gulenist and connected to other terrorist organisations. The Interior Minister called him a terrorist at a press conference watched by millions of people.

Following this, the Court of Cassation ratified his 2.5-year sentence. Recently, he shared another social media post about the failed rescue operation of soldiers held by the PKK. This incident hurt Mr Gergerlioğlu because previously, the relatives of these soldiers and police officers contacted him. He tried to get them released for 2.5 years, but the government did nothing. When the news broke out that they died in the rescue operation, he took it to Twitter to say that he wished more was done to get them released. This post has become the subject of another police investigation.

Mr Gergerlioğlu is currently very anxious and fears that the court’s decision would be read out at the parliament, which would mean his MP status will be removed, and he will be sent to prison. There was another similar case where the Republican People’s Party (CHP) MP Enis Berberoğlu was imprisoned despite the pending appeal hearing at the Constitutional Court. The parliament did not wait for the court’s decision in Mr Berberoğlu’s case and paved the way towards his imprisonment. Subsequently, the Constitutional Court decided against Mr Berberoğlu’s prison sentence. Despite this, the parliament is pushing to remove Mr Gergerlioğlu status as an MP, but he is trying to appeal to the Constitutional Court to prevent his imprisonment. Many lawyers have looked at Mr Gergerlioğlu’s case and argued that the prison sentence should never have been handed.

Many other people have suffered similar injustices, including Selahattin Demirtaş, the former co-chair of the HDP. Many people sent Mr Gergerlioğlu messages of support and said that they think he is unjustly treated. Many people used social media to show their support. Mr Gergerlioğlu ended his talk with an appeal to the international bodies for help to prevent the removal of his status as an MP.

The meeting proceeded to questions and comments from the participants, who raised questions about the end of the peace process in 2015, the international community’s silence on the repression of the HDP and the use of prolonged pre-trial detentions in the case of opposition figures.

Mr Gergerlioğlu is a prominent human rights activist, peace campaigner and medical doctor and was removed from his job at a public hospital in Izmit city in October 2016 by a presidential emergency decree. In June 2018, he was elected to the parliament under the HDP list for the Kocaeli province. Since then, he has been a tireless advocate of human rights in Turkey and a vocal critique of Erdogan’s authoritarianism.

Event chaired by Dr Derya Bayir. Dr Derya Bayir is the author of the book Minorities and Nationalism in Turkish Law. She obtained her doctorate from the Law Department at Queen Mary. Her thesis was awarded a prize by the Contemporary Turkish Studies Chair at the LSE. Derya has litigated many cases before the European Court of Human Rights, including the prominent case of Güveç v. Turkey. She was affiliated to GLOCUL as a visiting scholar while holding a Leverhulme Research Fellowship to research secular law and religious diversity in Turkey. Her areas of research include human rights, minority rights, diversity and law, and ethno-religious diversity in Turkey’s legal system, Nationalism, Ottoman pluralism, Constitutional Law, autonomous and federal state systems.