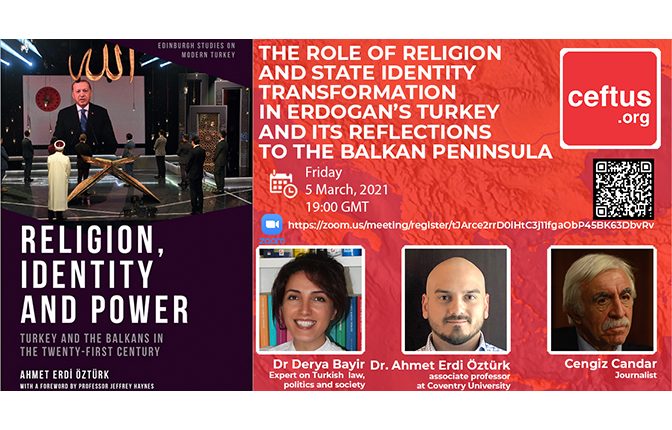 CEFTUS Online Talk “The role of religion and state identity transformation in Erdogan’s Turkey and its reflections to the Balkan Peninsula” with Ahmet Erdi Öztürk and Cengiz Çandar. Moderator of the discussion is Dr Derya Bayir.

This online talk focused on Dr Ahmet Erdi Öztürk’s recently published book Religion, Identity and Power: Turkey and the Balkans in the Twenty-First Century (Edinburgh University Press). The book focuses on Turkey’s foreign policy activism in the Balkans and unpacks the ethnoreligious and power-related political strategies Turkey has been pursuing in the Balkans during the Justice and Development Party (AKP). The talk explored some of the book’s themes and tried to explain how Turkey’s domestic ethnoreligious transformation in the 21st century has impacted its relations with the Balkan Peninsula. Lawyer and academic Dr Derya Bayır chaired the event and also included comments by renowned Turkish journalist Cengiz Çandar on the central issues Öztürk’s book covers.

Öztürk began by thanking CEFTUS for organising the event and said that he was delighted to be sharing the platform with Cengiz Çandar, with whom he has conversed about the issues discussed in the book several times. Öztürk gave a brief account of how he conceived the idea for his PhD research that the book is based on. His numerous encounters with people in the Balkans made him decide to study Turkey’s engagement in the Balkan countries and the diverse reactions from the people of the region. He said his book was not only a politics or international relations book but was interdisciplinary and transdisciplinary. It was at the intersection of history, sociology, and anthropology. This approach was favoured because it would be very difficult to understand Turkey’s domestic transformations and their reflections outside Turkey.

Öztürk provided a brief outline of the argument he develops in the book. He said that many people put forward the ‘Turkey is back in the Balkans’ argument. Academics also talk about it. People say that Turkey’s engagement with the region and President Erdogan’s strategies concerning the Balkans have long been shaped and energised by Turkey’s desire to establish economic, political, religious, and cultural hegemony in the region.

In the book, Öztürk scrutinises Turkey’s increasing involvement and activism and seeks to uncover the role of religion, power and identity reflection in the Balkans in the new millennium. He explains this process by the domestic level changes taking place in Turkey, mainly through state identity change and the adoption of a Sunni Islamic identity. Öztürkasserted that Turkey uses an Islam based approach, which he defined as ambivalent soft power. He said he did field research between 2015 and 2019 and spoke to many political and policy elites.

Many scholars label Turkey as a secular country, but this does not tell the whole story because Turkish secularism or laiklik (based on French laïcité) resulted in the state’s domination of religion. However, the order based on this began a transformation under Erdogan, which resulted in developing a new state identity in Turkey. Öztürk argued that this has been creating tensions between Turkey and the countries in the Balkans. His book examines these tensions that he believes are caused by Turkey’s ethnic-nationalist Sunni Islamic identity. He said Turkey was invited to the Balkans because it was secular and offered an example to be followed by the Muslims in the region. However, Turkey’s increasingly ethnic-nationalist identity and its Sunnification under Erdogan in the past decade have generated anxiety and tension in the region.

Öztürk mentioned four issues regarding the transformation in Turkey’s engagement in the region and its identity. First, most of the region’s political elites considered Turkey’s activism as a service to the global ummah (the Islamic community). Second, it has led to the exportation of Turkey’s domestic conflicts, particularly the conflict between the Gülen movement and the AKP. Although that conflict might be over in Turkey, Öztürk argued that it is still very much alive in the Balkans. Third, it has led to a greater degree of interfering by Turkey in countries’ internal affairs in the Balkans. He mentioned that the AKP version of neo-Ottomanism seeks to turn Turkey into the dominant actor in the Balkans. Fourth, it led to the instrumentalisation of Sunni Islam and nationalism in Turkey’s foreign policy. Öztürkconcluded by a comment on Turkey being an ambivalent actor in the Balkans and emphasised that without a closer look at Turkey’s domestic context, it would be very difficult to make sense of its policy towards the Balkans.

Çandar started his talk by recounting meeting Öztürk. He reflected on his interaction with the Balkans and mentioned that his family has roots in the Balkans, and it is a region he is emotionally connected to. He noted that when he was advising President Turgut Özal in the early 1990s, the war in Bosnia and the Kurdish question were the areas he was mainly focused on. He then recalled visiting the region with President Özal just two months before his death in 1993. They were touring the region because Özal was keen to work towards a peaceful solution to Bosnia’s war. Çandar recalled many Macedonian Muslims lined along the road towards the airport to greet President Özal. It was like Muslims and Turks were greeting their Sultan, and thousands of people were there; it felt like an encounter that would have taken place in the 19thcentury, and Muslims were there to greet their ruler. Çandar mentioned that in Ohrid, President Özal went into a tekke (a monastery of dervishes), and there was a group of children singing in Turkish. On the third day of the tour in Tirana, Albania, schoolchildren were singing in Turkish. Subsequently, this school became a Gülenist school, and the people running the school wanted President Özal to inaugurate the school. Despite the Turkish Ministry of Foreign Affairs’ advice not to do it, Özal inaugurated the school. After President Özal’s untimely death, Turkey’s Balkans policy was frozen, and Turkey’s rulers were not very interested in the region because the relations were based on shared Muslim heritage and that was against the republic’s secularism.

Çandar offered some remarks on Öztürk’s book and the themes that it discusses. He said that the ethnic-nationalist Sunnification was a radical departure of the neo-Ottomanist approach that President Özal wanted to formulate. Özal was a pro-Western leader in a unipolar world and wanted to integrate the Balkans into the West. Hence, President Özal’s neo-Ottomanist project was different from the one articulated by President Erdogan. Erdogan’s neo-Ottomanism is a very nationalist, Islamist, sectarian and coercive project. He mentioned that Öztürk’s book also highlights the evolution of regime change in Turkey and that it opens many new and often controversial issues for further debate.

The event continued with Özturk’s response to some of the comments by Çandar and questions and comments from Bayır and the audience.