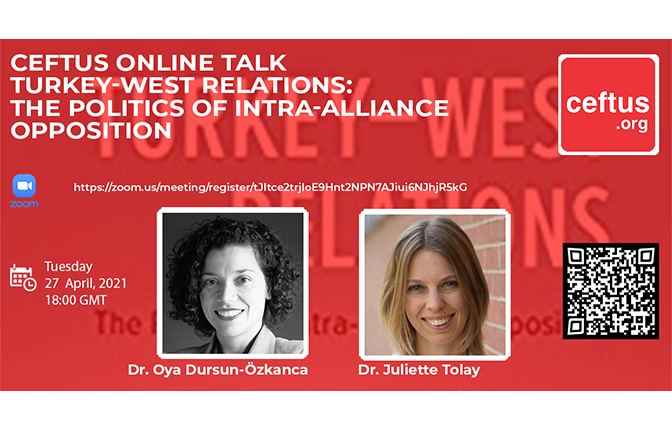 This online talk with Dr Oya Dursun-Özkanca discussed her recent book, Turkey-West Relations: The Politics of Intra-alliance Opposition (Cambridge University Press, 2019). Dr Dursun-Özkanca is the Endowed Chair of International Studies and Professor of Political Science at Elizabethtown College, USA. The talk was moderated by Dr Juliette Tolay, an associate professor of Political Science at the School of Public Affairs at Penn State University, Harrisburg, Pennsylvania.

Dr Dursun-Özkanca began by describing how she conceived the idea for the book. She mentioned that the central puzzle she wanted to explore in the book was Turkey’s deep-rooted place in the West and how it has changed in the past decade. She highlighted various milestones to Turkey’s journey towards becoming a fully-fledged member of the Western Alliance. However, despite Turkey becoming a candidate country of the EU, only one chapter of the accession negotiations was completed. She also drew attention to how the Western media talks about Turkey as an unreliable ally of the West. This was down to the tensions between the US and Turkey in recent years, Turkey’s rapprochement with Russia and the stalemate in Turkey’s EU accession process. Then she unpacked Turkey’s strategic estrangement from the West, which is the central puzzle the book explores. She said she wanted to understand ‘how and why do we see a Turkey that is increasingly moving away from its commitments within the Western Alliance’.

Dr Dursun-Özkanca also briefly talked about the research process and discussed the methodology she used. She mentioned that she studied the period from 2011 and 2017 and conducted over 200 elite interviews for her study with policymakers, diplomats, academics, journalists, and NGO officials in seven countries. The book relies on the theoretical literature of ‘Soft Balancing’, which is the balancing between states that are allies and friends. It usually utilises diplomacy, economic statecraft, and inter-institutional balancing. She contrasted this with ‘Hard-Balancing’, which incorporates harsh measures and hard power actions, such as the use or threat to use force.

Dr Dursun-Özkanca highlighted that the book’s novelty is that it comes up with three broad categories of intra-alliance opposition behaviour: boundary testing, boundary challenging, and boundary-breaking. She said these three categories are helpful for us to understand the different levels of intensity of tools of statecraft that are used by states when dealing with their allies. The framework of intra-alliance opposition also helps understand the motivations behind each tool. Dr Dursun-Özkanca highlighted that these are three different processes that are not mutually exclusive. There are several convergence points between these three processes of intra-alliance opposition. Also, they are not steps, which follow one another, but distinct processes and states may choose to reduce the intensity of tensions and mend their ties with their allies. Publicly expressed disagreements between partners can cause significant damage to the relations and the alliance.

Dr Dursun-Özkanca mentioned that the book looks at many case studies ranging from Turkey’s role in the Balkans, Turkey’s and Cyprus’ double veto over NATO security exchange information, the EU-Turkey refugee deal, energy security issues, Turkey rapprochement with Russia on security and defence, and Turkish foreign policy in Iraq and Syria. Dr Dursun-Özkanca then expanded on several conclusions her book reaches. She argued that Turkey is increasingly involved in boundary-breaking behaviour and has been trying to redefine its relations with the US, EU and NATO. She highlighted that Turkish policymakers were concerned that the West was not very interested in Turkey’s concerns and legitimate national security interests. They thought that the West was not interested in giving Turkey a seat on the table. She also drew attention to the lack of trust between Turkey and its Western allies, which she thought was a significant issue that has adversely affected the dynamics of the relations between Turkey and its Western allies. Dr Dursun-Özkancamentioned the adverse domestic climate within Turkey reflected through different public opinion polls that show overwhelming anti-Americanism and anti-EU sentiments among the Turkish public, which also adversely affect the relations, especially in the post-2016 period.

Dr Dursun-Özkanca then discussed some factors that are behind the changing relations between Turkey and the West. She mentioned the changing international order due to the decline in the US hegemony and the emergence of challenger powers that are ascending. Turkey looks around and sees a changing region as well, and Turkish authorities act in a way that posits Turkey as a regional power. Russia’s increasing role in the region was noted, and it was argued that Russia is becoming more visible. At the same time, the EU has reduced its role in the region and was retracting because the EU had to deal with its particular problems, ranging from enlargement fatigue, Brexit and dealing with the Euro-zone crisis. Dr Dursun-Özkanca mentioned the irreconcilable interests on the parts of allies when it comes to the Middle East, including the US support for Syrian Kurds, the difference in priority assigned to the removal of Assad in Syria, and the fight against the Islamic State, about which Turkey did not see eye to eye with its allies. She discussed some of the domestic factors behind Turkey’s boundary-breaking behaviour. She listed the failed coup in July 2016 and the nationalist alliance between the Justice and Development Party (AKP) and the Nationalist Movement Party (MHP) and other nationalists. The declining economic conditions in Turkey has also caused a significant strain on the relations.

Dr Dursun-Özkanca then offered some remarks on the post-2019 developments in Turkish foreign policy and said she believes that the developments indicate that the decline in the relations between Turkey and the West will continue. She highlighted that the prospects of Turkey’s entry into the EU have further declined, the relations between the US and the EU member states have also deteriorated during the Trump presidency, and Turkey used it as an opportunity to engage in further boundary-breaking behaviour. Turkey seems to have adopted an aggressive and confrontational foreign policy vis-a-vis the West pursuing increasingly boundary-breaking behaviour. She gave the example of the tensions between Turkey and Greece in the eastern Mediterranean last year and between Turkey and France. Turkey’s purchase of the S-400 air defence system is another example of boundary-breaking behaviour. Dr Dursun-Özkanca mentioned the S-400 issue as a significant development and signifier of Turkey’s boundary-breaking behaviour. Turkey went ahead with the purchase of the S-400 air defence system despite being warned against it.

The event continued with questions from the audience on several issues raised in Dr Dursun-Özkanca’s presentation.

Dr. Oya Dursun-Özkanca (University of Texas at Austin, Ph.D.) is the Endowed Chair of International Studies and Professor of Political Science at Elizabethtown College, USA. Her research interests include Turkish foreign policy, transatlantic security, European Union, South East Europe, and peace operations. She is the author of a new book, Turkey–West Relations: The Politics of Intra-alliance Opposition, published by Cambridge University Press in November 2019. She is also the editor of two books – The European Union as an Actor in Security Sector Reform (Routledge, 2014) and External Interventions in Civil Wars (co-edited with Stefan Wolff, Routledge, 2014) as well as a number of scholarly articles in leading peer-reviewed journals, such as Foreign Policy Analysis, Civil Wars, European Security, Journal of Intervention and Statebuilding, French Politics, Perspectives on European Politics and Society, and Journal of Balkan and Near Eastern Studies. She served as a Visiting Fellow of Research on South Eastern Europe (LSEE) at London School of Economics (LSE) in 2013, and received grants and fellowships from Georgetown University, the London School of Economics, the European Commission (multiple grants), the University of Texas at Austin (multiple fellowships), Deutscher Academischer Austausch Dienst (DAAD), the European Union Studies Association, and the Elizabethtown College (multiple grants). She is the inaugural recipient of the Kreider Prize for Teaching Excellence at Elizabethtown College (2015), and the recipient of the Richard Crocker Outstanding Service to Students Award (2018, 2020).

Juliette Tolay is an associate professor of Political Science at the School of Public Affairs at Penn State University, Harrisburg. Her research focuses on asylum, migration, foreign policies and eurocentrism in Europe, Turkey and the Middle East. Her most recent research focuses on migration diplomacy, postcolonial approaches to asylum and Turkey’s policies towards Syrian refugees. Her publications have appeared in Review of International Studies, International Migration, Journal Refugee Studies, Ethnopolitics, Les Etudes du CERI, and several edited volumes. Dr. Tolay is a former fellow at the Transatlantic Academy of the German Marshall Fund and was the 2010 recipient of the first prize of the Sakıp Sabancı International Research Award for a paper on multiculturalism in Turkey.