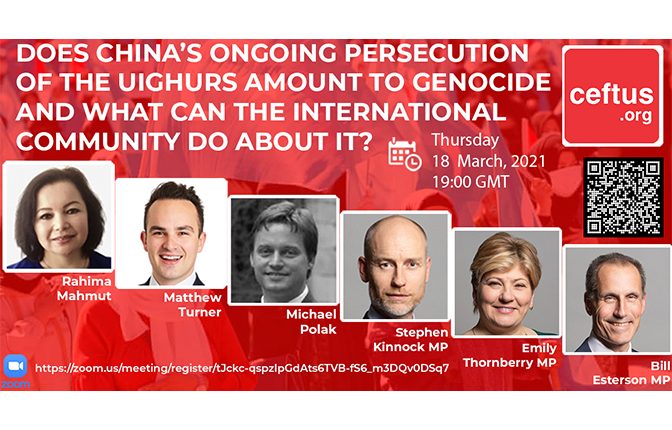 Does China’s Ongoing Persecution of the Uighurs Amount to Genocide, and What Can the International Community Do About it?

CEFTUS Online “Does China’s ongoing persecution of the Uighurs amount to genocide, and what can the international community do about it?”

Ever since the former US Secretary of State Mike Pompeo said, ‘I believe this genocide is ongoing, and that we are witnessing the systematic attempt to destroy Uighurs by the Chinese party-state’ on his last day in office, concerns about China’s repression of the Uighurs in its western Xinjiang region have intensified. Though several Western governments raised concerns about this issue since 2014, the US labelling the actions a ‘genocide’ indicates a new determination to challenge China’s treatment of its Uighur minority. This online talk discussed several aspects of China’s treatment of the Uighurs and sought to assess whether it amounts to genocide and what could the international community do about it.

The panel was chaired by Mr Ilhan Gokalp, who briefly introduced the Ceftus and the panellists. The first speaker was Ms Rahima Mahmut, Uighur singer, human rights activist and UK director of the World Uighur Congress. Ms Mahmut provided a personal account of what has been happening to the Uighur people. She mentioned that she was born in the city of Ghulja in North-West of East Turkestan, which is called Xinjiang Autonomous Region by China, and she was brought up in a large religious family. Ms Mahmut said that the persecution of the Uighur people in China has a long history. She experienced and witnessed many forms of it, starting from her childhood until she left the country in 2000. She referred to the Ghulja massacre in 1997 that led her to decide to leave her country. Since she had settled in the UK in 2000, she has not been able to return because of her activism against the Chinese state and in support of her people. She said the last time she spoke to her brother was in January 2017, and her brother told her, “Leave us in God’s hands”, and for over four years, she doesn’t know what has happened to her siblings or her friends. Ms Mahmut said what is happening is – as the US government and the Canadian Parliament described it – a genocide. Because of her work as an interpreter and translator, she has first-hand accounts of the suffering of the people in 21st-century concentration camps and heart-wrenching tales of mothers and fathers who have lost their children. She said you would come across tragic stories from “every Uighur family you will speak to”. The worse of all is that many people don’t even want to talk about it because of the fear they feel that other family members in China will suffer when they speak. Ms Mahmut said that she believes up to 3 million Uighurs and other Turkic minorities are locked up in concentration camps. Up to 500,000 people have been transported to cotton fields as slaves. Hundreds of thousands of people are forced to work in factories built inside or alongside the camps. One million Uighur children are separated from their parents and placed in boarding schools, who are prevented from speaking their language and practising their culture. She detailed other policies that China pursues, such as forced sterilisation of Uighur women.

The second was Mr Michael Polak, a barrister practising in human rights, criminal and international law at Church Court Chambers. Mr Polak described some of the organisations and campaign groups he is part of and contributes to. He provided pictures of his clients – ordinary people and prominent figures – to show how the genocide impacts the whole of the Uighur population rather than a part of it. He referred to some of the camps where the Uighur people are incarcerated and mentioned that the Chinese government initially rejected that they existed but now accepted their existence and described them as re-education facilities. Mr Polak said that the two main crimes that the treatment of Uighurs falls under are “crimes against humanity” and “genocide”. He referred to the definition of genocide provided in the Genocide Convention. He referred to the report by Newlines Institute on the Uighurs situation and mentioned that the report provides full details of the crimes committed against them. Mr Polak discussed the research done by Dr Adrian Zen, who provided evidence that the Uighur people’s population is going down in the region because of population control measures, such as forced sterilisation and forced abortions. He referred to other evidence that indicates a genocide is taking place. Mr Polak also mentioned that several parliaments have debated the issue and passed motions that recognise what is happening as genocide. He also talked about the possibility of a court case against China on genocide and crimes against humanity grounds. He also spoke about the 2022 Winter Olympics in Beijing and how it could be an opportunity to draw attention to the genocide of the Uighurs.

The third speaker was Mr Stephen Kinnock, Labour Member of Parliament for Aberavon. He said that the persecution of the Uighur people is a scar on the conscience of the world. The Labour Party was clear of the need to stand shoulder to shoulder with the Uighur people and the Chinese people more broadly as the quarrel was not with the people but with the belligerent, aggressive and expansionist policy of the Chinese Communist Party. There is no doubt that crimes are being committed in Xinjiang and mentioned Andrew Marr’s interview with the Chinese Ambassador. Mr Kinnock said the impunity with which authoritarian states behave and get away with human rights violations, which we cannot continue. He referred to the testimonies of Holocaust survivors and how they have called for the government to accept the Trade Bill amendment. The international community must step up and learn past lessons and prevent another genocide from happening. Mr Kinnock mentioned that the international organisations are paralysed by the veto in the United Nations Security Council wielded by China and Russia. China has also become very adaptable in using its economic might to build coalitions across the UN to support the Chinese position. However, Mr Kinnock mentioned that we must do more to overcome this paralysis in international institutions. As a political strategy, Mr Kinnock argued that we had to do two things: one, reduce our dependence on China, and two, we need to build alliances with other countries.

The fourth speaker was Matthew Turner, Chair of Campaign for Human Rights, who looked at possible economic sanctions as a measure against genocide. He said he would look at the corporate supply chains and referred to the report by UK Parliament’s Business, Energy and Industrial Strategy Committee published its report, Uighur Forced Labour in Xinjiang and UK Value Chains. Mr Turner said that he agrees with the description of the persecution as genocide and highlighted that a feature of it was forced labour and modern slavery. Mr Turner mentioned the transfer of labour from Xinjiang to factories in other regions of China and the inhumane language used in these transfers. He said many international brands were implicated in this transfer, and either directly or indirectly, they benefit from forced labour. A BBC report, “China’s Tainted Cotton”, on what is happening inside the Xinjiang province, shows how factories are built near the re-education camps and the use of forced labour. Mr Turner mentioned that 84% of China’s cotton comes from the Xinjiang region and that amount comes to 20% of the global cotton production. There is evidence that forced labour is used in all stages of cotton production, and it was highly likely that any clothes or textiles bought have cotton produced by slave labour. International companies could audit their supply chain to ensure that slave labour isn’t used in the cotton they use. He highlighted that the legal framework in the UK is not sufficient to get them to do due diligence to ensure their supply chains are free from slave labour. He explained some of the proposals for strengthening the Modern Slavery Act. He mentioned we needed more substantial mandatory human rights due diligence measures to be incorporated into the UK law to make companies comply.

The fifth speaker was Emily Thornberry, Member of Parliament (MP) for Islington South and Finsbury since 2005. Ms Thornberry mentioned the coalition-building that China did 25 years ago to ensure a more robust human rights regime in the world didn’t come into being when the UN Human Rights Commission met in Geneva. Twenty-seven countries voted for the ‘no action motion’ China advocated, and that ensured China’s human rights record didn’t become a topic of discussion. This was because of China’s diplomatic efforts and aid to persuade the Committee member countries to support its position.  Ms Thornberry described Foreign Secretary Dominic Rabb’s leaked conversation as a gift of truth regarding China, human rights, and genocide. Before that, the government was coming up with all kinds of excuses not to support Lord Alton’s genocide amendment bill. After the leak, the government’s position of ‘human rights does not matter’ became apparent. Ms Thornberry said that for the government, the Uighurs don’t matter; even genocide doesn’t matter. When the genocide bill comes to the Commons on Monday, the government will present its position once again. Ms Thornberry said that what was happening to the Uighurs was a genocide, a systematic attempt to end the people’s existence, their culture ad faith. She said that the international community could ensure the situation doesn’t get any worse, including sanctions against Chinese officials.

The meeting continued with questions from the participants concerning the issues the meeting raised. The final speaker, Mr Bill Esterson, Member of Parliament (MP) for Sefton Central since 2010, was able to join the question and answer session only and expressed his opinions on the issue.

Rahima Mahmut – is a Uyghur singer, human rights activist and the award-winning translator of the poignant prison memoir “The Land Drenched in Tears” by Soyungul Chanishe.  She is the UK Project Director for the World Uyghur Congress.

Matthew Turner is Chair of the Labour Campaign for Human Rights, where his main areas of focus are corporate supply chains and economic, social and cultural rights. He is also a practising barrister at Crown Office Chambers, specialising in personal injury, clinical negligence, inquests and public inquiries. Matthew is also an advisor to the World Uyghur Congress (UK) and the Stop Uyghur Genocide campaign.

Michael Polak is a barrister practising in human rights, criminal and international law at Church Court Chambers. Michael is a Director at Justice Abroad, which helps people who need assistance dealing with legal proceedings overseas. Michael is also on the advisory committee of the World Uyghur Congress London office and undertakes work for the WUC and Uyghurs and their families who have been subject to disappearance or arbitrary detention.

Stephen Kinnock is the Labour Member of Parliament for Aberavon, having been elected in 2015.

Previously, Stephen was the Director and Head of Europe and Central Asia at the World Economic Forum, having worked for the British Council for more than 12 years where he held senior UK and international positions in Russia, Sierra Leone and across Europe. In 2012 he took up a position at Xyntéo in London, an advisory company that helps global businesses go beyond the green basics and reinvent the way they grow.

Since 2020 he is Shadow Minister for Asia and the Pacific